; Eric van limpt Ontwerper goudsmid - News | Tight chain of office with a lot of symbolism Eric van Limpt
Your experience on this site will be improved by allowing cookies.

No products in the cart.

Tight chain of office with a lot of symbolism 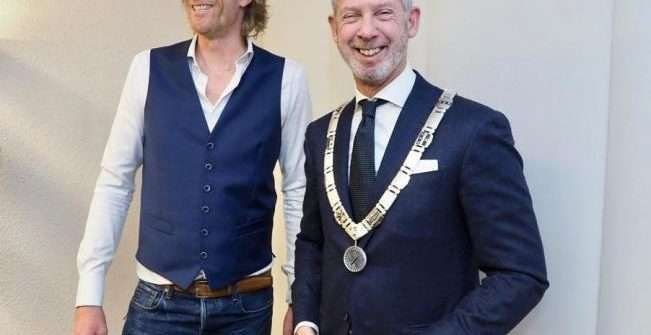 Mayor Onno Hoes has a brand new chain of office. It was presented to him on January 2 at 11:00 am by the Hoofddorp goldsmith and designer Eric van Limpt. The chain has a strikingly modern look, contains traditional elements and new symbolism.

The new municipality of Haarlemmermeer has been a fact since 1 January. This requires not only a new municipal coat of arms, a new logo and a new house style, but also a new chain of office for the mayor. Eric van Limpt is honored that he was selected for the assignment.

“Very special, I had never made a chain of office before. And it is great that it is for the mayor of my own municipality. ” Van Limpt lives in Hoofddorp and was born and raised in Nieuw-Vennep.

A token that is reversible

Van Limpt was certain from the start that the chain would be a modern and sleek design.

"It can't be tight enough for me."

The chain is made up of smooth silver links. In twelve of them the coats of arms of the twelve neighboring municipalities have been engraved with fine lines.

“It was a wish of the municipality to process these weapons in the chain, just as the surrounding municipalities were included in the old chain of office. I drew the weapons on the computer and the engraver then engraved them in the links. ”

31 cores and the countryside

In the link to which the medal is attached, two silver balls have been placed that symbolize the old municipalities of Haarlemmermeer and Haarlemmerliede and Spaarnwoude. Their old weapons are engraved next to it. The medal itself is set in a ring and surrounded by 32 smaller balls.

"31 balls represent the 31 centers of the new municipality and one ball represents the countryside."

The ring around it is narrow at the bottom and wider at the top.

"A reference to the growth of the church."

Van Limpt has paid a lot of attention to portability. The links are connected in such a way that there is little play, so that the chain remains in good shape. He has also taken into account that the chain will be worn by men and women of different stature. The silver links on the back of the chain (on the back) are solid and those on the front hollow, so that it is well balanced.

"The chain should also not be too heavy, you should be able to walk around with it for a few hours."

The links were first printed in 3D and then cast in silver.

It takes many hours of work, but Van Limpt is proud of the result.

"I've been in the business for 32 years, but consider this one of the highlights of my career."

There were more highlights for him last year. He celebrated his 25th anniversary as an independent goldsmith and won a prestigious prize at the international A 'Design Award and Competition.

Press release New chain of office for the municipality of Noordwijk

On December 1, the new chain of office of the municipality of Noordwijk was handed over to its mayor. Ms Verkleij is very pleased with the new chain and carries it with verve.

These are exciting weeks in the limpt house in Hoofddorp. the streamers hang in the room. for son justin, who just turned 18 years old. he hasn't celebrated it yet because he's busy with his exams. but if possible, the garlands can linger until mid-April. goldsmith eric van limpt then gets to hear whether his ring, made of a unique diamond, has won a prize at a competition in italy.